Shock was not
canvas tents strung along
the shore of Lake Superior rather than sleazy
shag-carpeted motel rooms south of Marathon
no.

Shock was not flying clear dome bell chopper
black fly and bear territory
land-on-a-dime river side
in the middle of the God-forsaken-wilderness
or God’s country depending on how you look at it
no.

Shock was not watching Roy walk pissed off
straight into the bush for a three hour no map
bush-whack straight back to camp
to roll cigarettes
and hork into a smoldering fire
no.

Shock was
axe clean cut through boot and bone and
big Dan felled like a lodgepole, you pinned
like a bug to the forest floor.

“Survey Crew” was first published in The Antigonish Review Issue #177

To walk a vineyard’s long line,
the thrumming rhyme
of post and wire, post and wire,
post and wire. Gnarled stumps
of last year’s growth pruned back hard
to four thin arms, how
everything waits
from the ground up.
Rivers of stone hand gathered
and laid down row by row by row
to warm the waking roots,
this pause, this expectancy,
this too is a prayer.

— “everything holds still for the wind,” Leah Horlick

We find each other
in the cosmopolitan squint, polished
concrete, smoked chrome rooms.
She’s hard to peg at first
lace dress chic, prosecco cocktail
starry in her hand. She’s been
chin-upped by the west. Tested
by an incomprehensible horizon
and passed, but for her pose and bend.
For the wind

that sweeps the wide-open
motherland has left her
with a slant stance, sideways
as corn bowed to a storm.
I too am made
from orchard and axe, crop
and scythe, harvest born
humble earth miles and years
behind me. It’s all rock
out here. Everything stops

during these vigils, holds space
for choked swamp, cedar stump
tributaries split from the ocean
Vancouver’s bloodstone—step forward.
My home is a backwards stamp, like hers.
parched-lawn green, forever level.
Now we find each other turned by urban obstacles.
The far-removed markers we share and seek
chokecherries, ink caps, chorus frogs, golden yarrow
crickets, monarchs, paints and sparrows

“Country Mice” was previously published in Where the Words End and My Body Begins (Arsenal Pulp Press, Spring 2015)

Crisp March night
under half-moon sky.
Coyotes on the edge of town
throating the song of the forest—
fluted, wild as an icy crag,
flawless ease
of ancient lore,
all the dogs silent.

What shivers
is the sub-zero night.
Moon-carved shoulder
of Goat Mountain
an eerie resonator.
Cobalt blue of winter sky
brilliant—stark against fir
steeped in black.
One thing is sure
amongst so much doubt—
a voice
calling out mastery
from the dark

“Exhibit: in the woods, outside Duncan, British Columbia” was previously published in children of air india, un/authorized exhibits and interjections, (Nightwood Editions, 2013)

low tide, and everything hidden
is now uncovered: the black weed, certainly
but also the upright fields of barnacles fighting
for space with the black mussels, these
gathered like a thousand shiny goat hooves
tied up and down the oily piles

and we admire their defense, breathe
in sweetly their walls’ salt smell

no dreaming in briny bone-cells
for our washed up, low tide hearts

while the sun shines, they must lie
still in it, let their tissue-thin skin crack
and curl open, gasping in the open air

tides change
turn and return
barnacles and mussels, even the black
weed crunched in the sand, know
the tide will miss them and come back

our hearts, baking in their cracked-up
hides, lose all knowing, can breathe only
shallowly for reasons they cannot remember
trying not to lose what’s left of slippery life

“Low Tide” was first published in Bonsai Love, by Diane Tucker (Harbour Publishing, 2014, www.harbourpublishing.com) and is shared here with permission.

The wet-felt overcast air packed
into the August afternoon is scattered,
cooled by your melodica and your voice
in old French song.

The humidity gathers itself
into raindrops and rushes to you.
It throws you all its tiny silver coins.

All the damp sweaty scurriers,
tourists and shoppers, be damned.
You are going to sing.

Thank you for your blue-boxed breath,
your thin paisley dress dripping
bohemian beside designers’ doors.

At the rushing hour of the afternoon
you pull harried ears to the curb,
bring into focus the waiting bench
and the fresh tree. Your song’s
momentum speeds us into stillness.

The gulls’ shadows, temporary crows,
rush up the dock’s rust-stained sides,
meeting their white-as-angel selves at its lip,
all under the gaze of two yellow
tyrannosaur cranes on their bee-striped feet.

Some of the black bird-shapes are real crows
and the rest are seagulls’ shadows, wider,
their wings narrower and knife-shaped, gulls
trying to paint themselves up the vast grey
building’s side. But the image never sticks
and they fly by again: living, rising brushes.

The crows are smaller and smug in the distance,
racing up and meeting their shadow-selves
in the sky. But they can’t streak it either, great
horizontal slab a block long, metal tunnel
disgorging ships, wall of wind gathered and pressed
flat and swung up perpendicular to the water.

Into this both crows and gulls slam their shadows,
scrape them up its sides, sweep them back down
again, day after day of invisible avian ink making
time itself the paint against the wall, a streaked
and graven web of swift calligraphy.

Text: To have a space wrought / in silence, not for humans, / but for birds, wild-earth, / the stockpile of seasons.

Text: Strange   how we become   silent / in the presence   of tall trees   almost / as if they were   ancestors   and we / granted an audience:   in their leaves, needles,   in their cool / distances we strain   for messages,  sealed

Poem Excerpt: But he just wants to run / to the expanse of green, through to / openness.

Poem Excerpt: I have listened to the chatter / of souls in the snap-snap of seeds / breaking from its cones in spring. / Now, winter’s deep and silent well / has me submerged and I turn, / entreat that dark-eyed spirit / watch over me.

Text: the gift / a tree that is inside the dream / and in the tree is god / and in god the air / and in the air the green

I just recently returned from a trip to Japan and, before that, France. A combination of both work and pleasure or, in the case of being the artist that I am, “pleasurable work.” I love the fact that I can work anytime, anywhere. Inspiration comes to me from my surroundings. I don’t sit and wait, though, for it to come; I prefer to chase after it with blinding faith and my box of colours.

I was born and raised in Vancouver, British Columbia, a city girl with a backyard that hosted beautiful cedar trees. I lived with those cedar trees for twenty-three years before I moved to a new life living on farms with horses and wonderful green fields that went on forever. Growing up, there were always two things that I was very sure about: my passion for art-making and horses. I knew I was very fortunate to know what I wanted to do with my life at a very young age. The voice in my head would always say “paint, just paint.” It still does.

My work has led me in many different directions over the years—from subject matter to painting techniques—always challenging, whether it be landscapes or figurative work. Collaborating with various organizations and having them involved with my art shows is always a welcome experience. Working with “WOLF: Watchers of Langley Forests” and collaborating with twelve poets for my “Written in the Forest” show achieved results that were certainly hoped for: a small group of determined people, a big idea and a box of colours.

“Written in the Forest” came to me when I joined in a call for public support through poet Susan McCaslin inviting artists, poets and musicians to help bring an awareness to save twenty-five acres of mature coniferous and deciduous old trees in Glen Valley just outside Fort Langley, British Columbia. More than two hundred poets contributed to the Han Shan Poetry Initiative to raise awareness about the forest. In December 2012, poems inspired by Han Han, an ancient Chinese poet who suspended his poems from trees, were hung in the trees in Glen Valley for several months. I was so inspired by what I experienced watching and listening to the poets that I approached Susan McCaslin and asked if she could help me select twelve poets and invite them to be part of my next art exhibition. I selected phrases from each poem to express how I felt while painting impressions of McLellan Forest East and West.

A word (or person) with a Chinese origin living in the West is often called an “egg,” which is white-skinned but yellow-hearted. 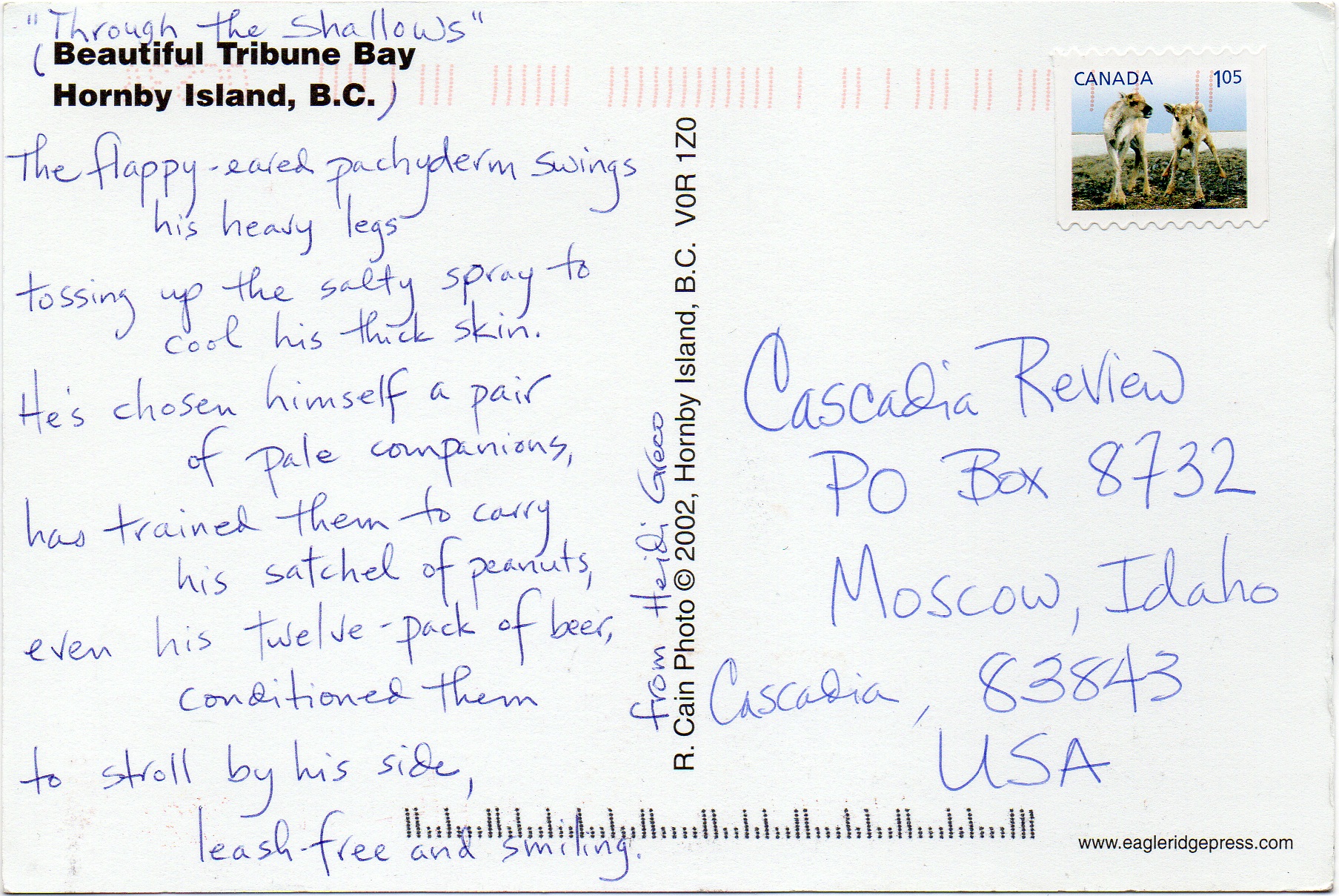 Through the Shallows: The floppy-eared pachyderm swings / his heavy legs / tossing up the salty spray to / cool his thick skin. / He’s chosen himself a pair / of pale companions, / has trained them to carry / his satchel of peanuts, / even his twelve-pack of beer, / conditioned them / to stroll by his side, / leash-free and smiling. — Heidi Greco